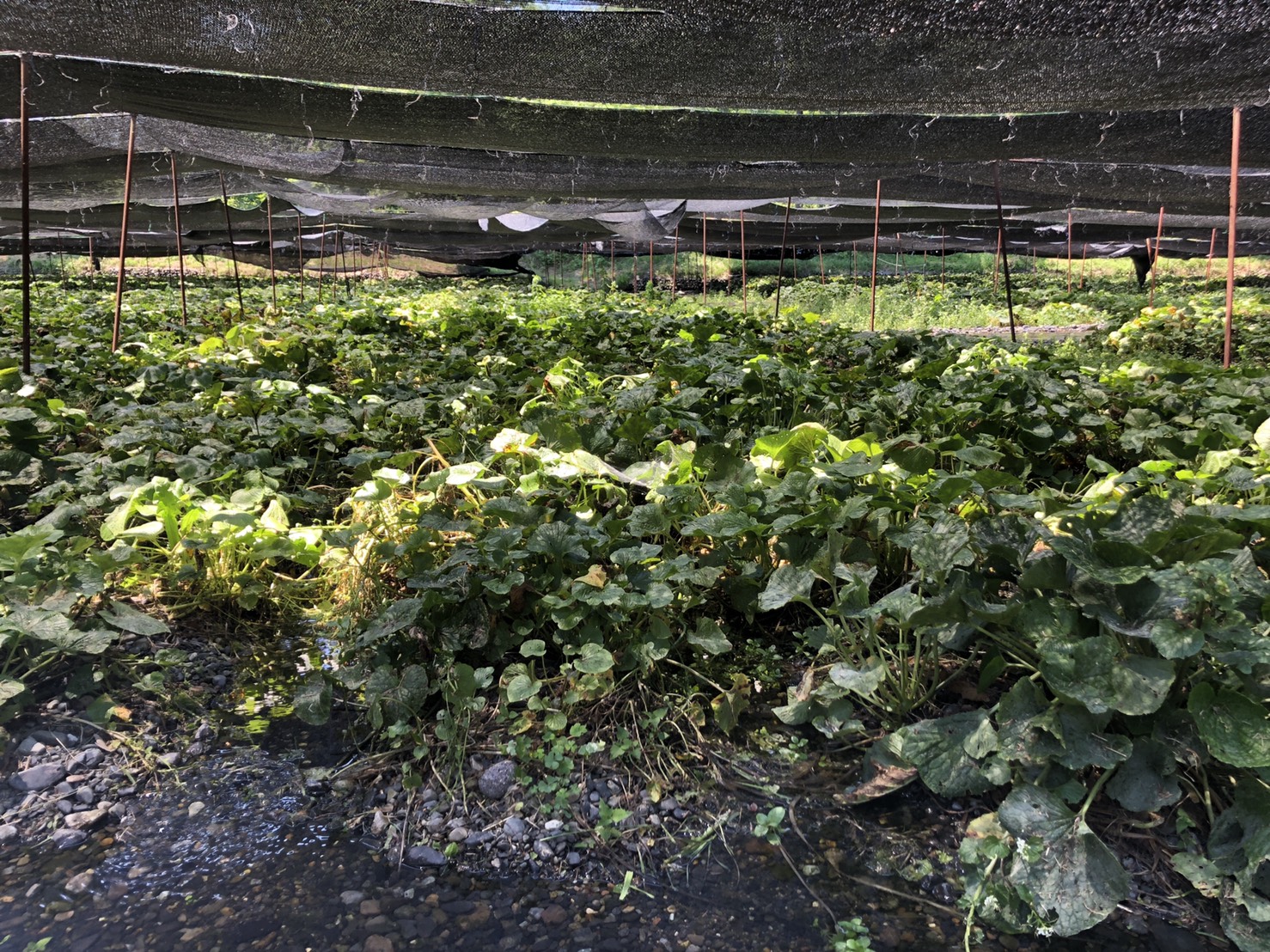 You can find many kinds of wasabi-flavored snacks at supermarkets both in Japan and other countries. Mostly intended to enjoy the stimulus like sting within a few seconds of putting it in your mouth.

Wasabi is the most famous Japanese vegetable in the world, but I feel that it is surprisingly considered to be just a stimulant overseas, so this time I will investigate such wasabi.

In memories of wasabi cultivation scenery, what you often see on TV is the clear stream of wasabi fields that are cut open in the mountains, and the water looks so cold and it seems to be comfortable.

In my mind, the wasabi cultivation area itself seemed to be in a deep mountain valley, so I thought that if I planted wasabi seedlings in a stream with clean water, it would grow wildly, but it wasn’t.

Importantly, the water that can be used for wasabi fields for growing wasabi must clear and at the same time the water temperature needs to be around 13 degrees Celsius throughout the year. The water of the swamp which flows on the surface of the ground is not useful because the temperature changes drastically and there are many impurities.

Therefore, the mountain is dug up to the stratum where the water veins that pass through the ground spring up, and the waterway is arranged so that the water flows through the entire Wasabi field (the ridges are arranged diagonally to the flow), and the drainage channel is prevented from pool of water. It is necessary to build a wall with rocks and stones so that sand or mud do not flow into the wasabi field from the wall surface.

What a tough work.

After that, wasabi will grow with the nutrients absorbed from the clean water.

Wasabi is such a very delicate plant, isn’t it?

As mentioned in other article, the chili pepper component(capsaicin) was originally produced in the chili pepper to prevent it from being eaten by animals, but the wasabi component (allyl Isothiocyanate) seems to be released from wasabi itself into the soil to keep other plants away from the surroundings of the wasabi.

As a result, wasabi itself is not nourished by the surrounding plants, but it is also affected by its constituents and cannot grow bigger.

It’s a pity that they are too delicate, but allyl isothiocyanate generated from such wasabi can be washed away in a clear stream by cultivating it in wasabi fields.  So that it will be possible to grow larger than wild wasabi.

Originally, “spicy” or “sting taste” was developed as a weapon to keep foreign enemies away, whether it was chili pepper and wasabi, but humans eat it as “yammm, yammmmm …”. They may be thinking, “Human, crazy …”.

Anyway, a wasabi bowl is the best way to enjoy such wasabi. Isn’t it?

The wasabi bowl I had in Nagano was served with rice cooked in a kettle, green onions, chopped seaweed and dried bonito flakes (the basics), and the flesh wasabi that was set in the middle of the tray.

The pungent component of wasabi is a volatile oil, so the aroma will be weakened in 5 minutes after grated. Therefore, when you put freshly ground wasabi on the rice, the heat causes the spicy ingredients of wasabi to rise more flagrantly, so you can fully enjoy the flavor of wasabi.

Actually, it was my first time eating a wasabi bowl at Wasabi Farm, so I might be in agony with a spicy nose.  I was thrilled, but I grated it despite my anxiety. Even if I ate the wasabi of as it was, it did not sting my nose. I was surprised.

Sure, it’s nice to enjoy a fleeting piercing stimulus, like a wasabi-flavored snack or sushi eaten. But personally, I think it’s not bad to just enjoy the refreshing and cool bell-like tone on my tongue. I feel it like wind in the woods.

The pungent ingredient of wasabi is basically the same as mustard. However, the component of wasabi contains green notes (a scent component like green grass), so when you eat it, you will be surrounded by a very Japanese scent.

You can feel like you sit on a cool tatami mat comfortably in summer day and relax your mind as if you were mindful.

In Japan, we often eat steak with wasabi. This is because the freshness of wasabi can wash the greasiness of the meat and give it a refreshing taste.

Mustard, mint jelly and chili sauce are good, but why not try a different oriental steak with wasabi, a Japanese herb.